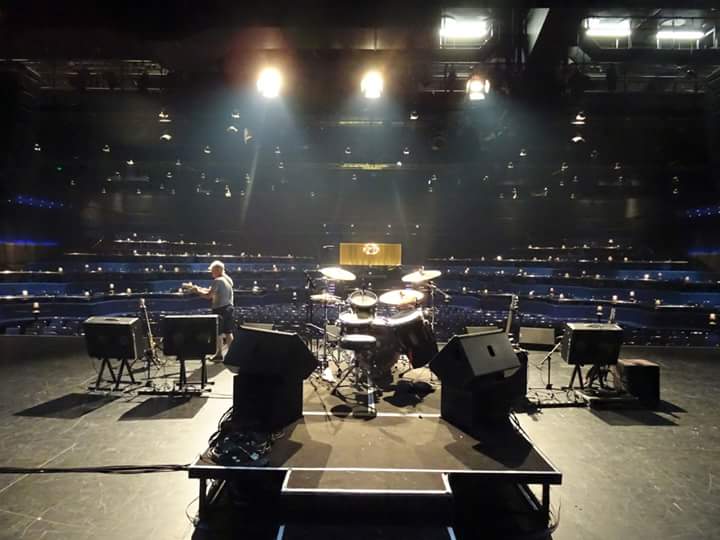 As I write my 2nd blog for Istanbul Mehmet, I am sat on my balcony in Hervey Bay, Australia. We have 2 hrs till we leave the hotel for sound check for this evenings show in Maryborough.

This is my 6th Australian tour with The Searchers and to date, the hardest schedule so far.
We are currently on show 23 out of 27 and most of the theatres have been sold out.
It still blows my mind that I travel halfway round the World and play to packed out theatres.

We arrived in Perth on February 2nd and after 1 night in Perth we travelled on the 3rd to our first show, in Mandurah.

As you may know, Australia is a very big country and it means we have a lot of travelling to do, to play 27 shows over 5 weeks.

There is no sight seeing and very little pool time on this tour.
The Western side of Australia was ok as all travel times were around 2hrs, but on 9th February we had to travel from Esperance to Perth, 9hrs, then wait at Perth airport for 2hrs, then catch a 3hr flight to Adelaide.
We arrived in Adelaide at 10.30pm after leaving the hotel at 5am.

By the time we arrived at our hotel in Adelaide, everywhere was shut. Luckily we found a ‘workers’ café still open in China Town and we had some proper Chinese food.

Now I would like to dismiss this notion that Oz has a drink culture. Most pubs shut around 8.30pm. It is very hard to find a pub outside a city open after 9pm.
We arrived at a pub in Bunbury at 8pm. We ordered drinks and sat down. A few minutes later the barman called last orders. Obviously we thought he was joking, but he explained he was bored and was going home!

There has also been a lot of getting into the hotel after a show at 11pm and checking out at 5am to catch a flight.
Because of all the equipment we have (Drums, Cymbals, Hardware, 3 Guitar amps, 1 Bass amp, 3 guitars, 1 bass guitar, mic and guitar stands, guitar pedals, Synth pedal and 6 luggage bags) we have to make sure we are first in line at check in and we like to be there 2hrs before the flight takes off.

Tomorrow (Thursday 3rd March) we are leaving the hotel at 5am (4.30am get up) to catch a flight from Hervey Bay to Brisbane, then a connecting flight to Sydney. Once we have the van and car loaded, it’s a 2 hour drive to Mittagong.

But all this effort to get us on stage is always worth it. As I said earlier, nearly all the shows have been sold out and the atmosphere is always great , and I love playing in Australia.

As soon as we get home (land at Heathrow on Tuesday 8th March) we have 3 days off, before we do 2 shows at Butlins Skegness for a 60s weekend and then we launch ourselves into our Spring tour.

The highlight shows of the Australian tour are Melbourne Crown Casino and Twin Towns Resort. Both were sold out and both venues hold just over 1,000 people.
I have really fallen in love with Melbourne over the years. The music scene really is alive there and the clubs/pubs stay open past 10pm!

This year our hotel was across the road from Albert Park. Being a big F1 fan, I had to go and walk round the F1 track, which was being prepared for this seasons opening race on March 20th.

Twin Towns Resort is in a town called Tweed Heads, just down the road from Surfers Paradise.
This town is effectively split in half. 1 half in New South Wales, the other, called Coolangatta, is in Queensland.

The resorts hotel is on 1 side of the road, with the resorts theatre and pubs on the opposite side of the road.
Meaning it is is split by 2 different time zones. If you cross over the road leaving the Twin Towns hotel, you have to change your clock back 1 hour.
To stop confusion over stage times, the theatre stays in the same time zone as the hotel complex.

While in Oz, I have bought a GoPro.
I have tried it out a few times and I must say, I am very impressed with the picture quality.
I shall record a few shows when I am back in the UK and hopefully upload some video soon.

That’s it for my 2nd blog.
I will get round to explaining what equipment I use, but till then, take care and keep drumming!

Scott Ottaway Drummer for the 60s legends, The Searchers, I replaced Eddie Roth on 26th February 2010. I came up through the ranks, after working in house bands on cruise ships, holiday parks and I was a regular dep on the hit west end Queen musical, We Will Rock You, at the Dominion Theatre, London. I am proud to use and be associated with Istanbul Mehmet Cymbals, Carrera drums, Pellwood drumsticks, Porter & Davis tactile monitors and CODE drum skins. *All views expressed by myself, are my views only and not the views of any parties I am associated with* View all posts by Scott Ottaway