In part two of “5+7=12” we are going to look at a couple more applications of 5757.  We will start off where we left off and then move onto some examples using the bass drum to break up the hands.

1) After the previous lesson on 5+7=12, I had a couple people ask me for some specific applications.  I don’t want to give you too many because the process of exploring various orchestrations around the kit, is part of the process of really learning these phrases as options and not just a single use application.  However, here is a really simple fill where the accents in the right hand are moving around the kit.  Just make sure you are playing the subdivision accurately and not being pulled off time by the accent placement.  Once you have this, move it around and come up with your own versions.  This is just a very simple starting point.

2) Here is a simple groove example.  I have placed the back beat at a different point in each grouping of seven.  Have some fun in moving the backbeat yourself and also re-arranging the groups of 5 and 7.  They don’t have to alternate nor do they have to start with the 5s each time.

3A) In the following three examples, I have added some bass drums in.  This example is just three notes hand to hand and two bass drums.  Please note that in all the examples in 3, I have written them as either quintuplets or septuplets.  That is just to group each phrase neatly.  In the later examples of 4 and 5 we will still be playing them as sextuplets.  For now just get confutable playing the grouping of 5.

3B) This is the same as 3A, except we are playing the the first three notes RLL instead of hand to hand.  This will open up other orchestration possibilities when moving round the kit.

3C) In this example we have take the basic hand to hand version of a grouping of 7 notes and replaces the last two with bass drums.  What I really like about this is that the hands are now playing a grouping of 5 so you can utilise some of the orchestrations I am hoping you have worked out from previous lessons.

4) Here we have a grouping of seven and then the five with bass drums added.  It flows really nicely around the drums so take some time orchestrating this in a whole load of different ways.

5) This is the same as the precious example with the exception that we have changed the grouping of five to RLL instead of RLR.

6/7) I hope you enjoyed that.  I just wanted to mention that, when it comes to using this in “real songs”, to be honest I wouldn’t.  These are the kind of things that unless you’re playing math-rock, they should stay in the practice room.  That said, if you do want to play them, patterns like 4 and 5 can be tough to pull off as the bass drums are at the end of the bar.  I would either, reverse these sticking (KKRLRLR for example, as seen in 6), or replace the last beat with something more straight forward such as in 7. 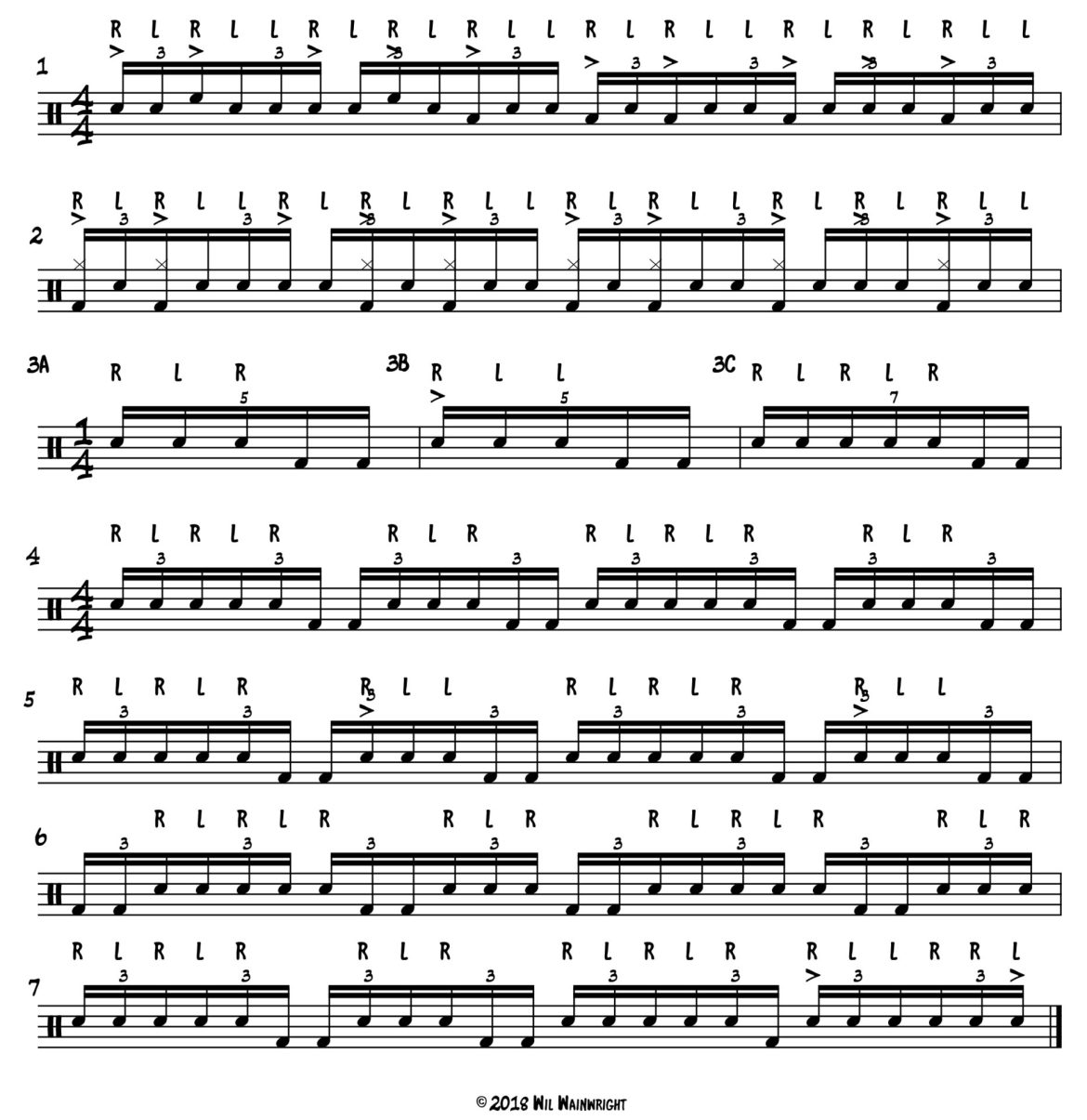