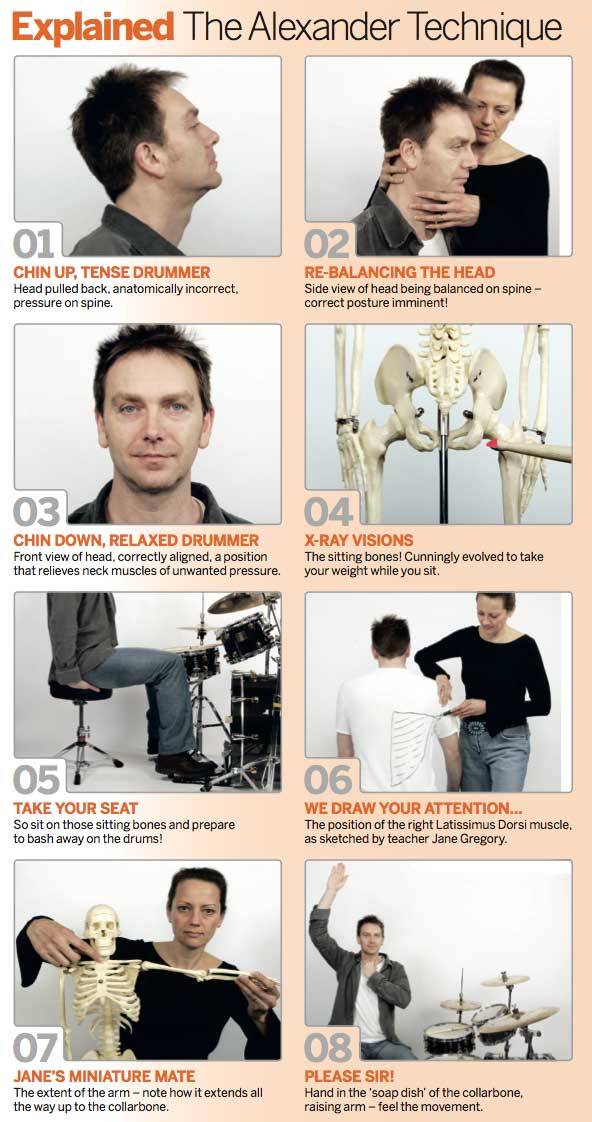 Devised by Frederick Matthias Alexander, an Australian actor who suffered from voice and breathing problems, the Alexander Technique operates on the principle of re-educating the body to achieve postural harmony and well-being. Essentially a self-help programme, the Alexander Technique teaches us how to become more aware of bad postural habits – often the cause of restrictive physical tension – and helps us to use our body in a more balanced, efficient and co-ordinated way.

Although the Alexander Technique has long been helping classical musicians to cope with problems such as RSI, tendonitis, backache, tennis elbow, incorrect breathing, tension

and even stage fright, it’s likely that the majority of non- classical musicians are unfamiliar with the method. Well, time to remedy that right now, by beginning with the important relationship between the head, the neck and the back.

Do you know how much your head weighs? Go on, hazard a guess…

Well, it weighs a whopping 10 pounds (10 bags of sugar! Or, to be more ‘metrically correct’, approximately five kilos). It’s hard to believe but true! So, that means if your head isn’t balanced correctly on the top of your spine, it’s putting 10 pounds of unwanted pressure (or sugar) on your neck muscles!

This helps us to understand why the relationship between the head, neck and back is so important.

First off, let’s talk about the muscles of the neck. It’s the big muscles at the back of the neck that hold your head up on your spine. If you hold too much tension in these muscles, they will shorten and pull your head backwards and off balance, as you can see in Pic 1. Apart from an obvious extreme pulling back of the head, it may be difficult to know whether you’re holding excess tension in your neck, because the difference between the anatomically correct and incorrect position is subtle. Try the following exercise to check the position of your head: sit in front of a mirror and check if you’re looking straight ahead, and that your eyes are level. Does this feel like where your head normally is? Now try this: allow the muscles at the back of the neck to release very slowly, until your chin is resting on your chest. Now slowly bring the head back up, using the minimum amount of neck muscle tension, and until you can see that you’re looking straight ahead in the mirror.
This may feel quite strange to begin with, because chances are that you probably normally hold your head too far back, and it may now feel as though you’re looking down, but check the mirror – it never lies! Pic 2 shows the correct alignment of the head, balanced on the spine, with Pic 3 showing the front view. Alexander Technique practitioners place great emphasis on this, referring to it as ‘freeing’ of the neck (more on this subject next month).

Of course, during the throes of musical passion, it may seem difficult to maintain such a balance of the head, given the physical nature of the instrument. However, as usual, awareness is the key consideration. With due care and attention, you can still play with passion and emotion, while allowing your head to rest in the most balanced and physically efficient position. You know it makes sense.

As drummers, we can appreciate the physical and mechanical (ergonomic) benefits of adopting a physically efficient sitting position. In respect of this, it’s time to introduce you to some very important anatomical friends – the sitting bones! The sitting bones are the two round bones underneath you when you sit (surprise, surprise!). Pic 4 (as modelled by our small but perfectly formed skeleton), shows the position of the sitting bones, from behind. Try sitting on your hands, on your drum stool (See Pic 5, as modelled by our large but perfectly formed drummer!), then move around a bit, and you’ll feel your sitting bones. Basically, you should be sitting on these bones at all times – that’s what they’re designed for!

With this in mind, it’s a good time to mention the relationship between the body and gravity – a key Alexander Technique principle. This is best described by Sir Isaac Newton’s third law of motion, which tells us that “for every action there’s an equal and opposite reaction”. In plain English, this means that the ground is coming back up to you and supporting you with a force equal to that of gravity. So, in plain drumming terms, by thinking about your sitting bones getting all that support from your drum stool, you can really

let yourself use that upward support

to give you a feeling of lightness, all the way up the spine. Basically, the freer your spine is, the more stable your torso will be, allowing for more freedom and balance in your limbs, and providing unrestricted, tension-free movement for the purpose of technical execution.

The really important thing to know about your arms is that they’re an extension of your back, and this is a key consideration in Alexander Technique. Physiologically, we have stabilising muscles and mobilising muscles. The stabilising muscles (core muscles) lie deep within, and effectively support, the trunk of the body. They generally attach to the spine, pelvis, and other muscles that support the scapulas (shoulder blades), thereby stabilising these areas to create a firm foundation for co-ordinated movement of the mobilising muscles, which move the arms and legs.

Without getting into too much physiological detail, it’s important to look at the Latissimus Dorsi muscles (commonly referred to as the ‘Lats’), which effectively play a crucial role in the mobilisation of the upper limbs. Have a look at Pic 6 (please note that

no tour t-shirts were harmed in the making of this photograph!) and you’ll see the position of the Latissimus Dorsi muscle, which covers a large area of the back, along both sides of the spine, out and up, to where it inserts into the upper arms. In general, paying attention to the large and powerful muscles of the back can provide more physical efficiency, comfort and endurance when playing drums – take care of the stabilisers

with correct postural habits and the mobilisers will take care of themselves. Now that you are aware of this connection, stop thinking about the arms finishing at the shoulder, and instead allow your mental image of your arms to extend around to your back.

Another important consideration regarding the arms is that they don’t end at the shoulder in the front of the body either; they actually carry on right up to the collarbone, as you can see in Pic 7. This alone is not as important as harnessing your back power, but an awareness of this will immediately give you a little more freedom of movement in the arms and shoulders. Check it out for yourself: put your left hand firmly into the ‘soap dish’ shape of your right collarbone. Now raise your right arm upwards, as in Pic 8. You will feel the movement in your collarbone. Any rigidity in the collarbone will restrict movement and, again, it pays to be aware of this physical connection when playing drums.